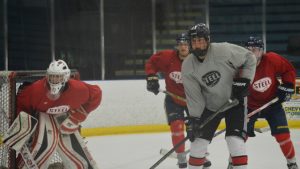 GENEVA, ILLINOIS – Over 100 elite hockey players from around the globe converged at Fox Valley Ice Arena this weekend to participate in the Chicago Steel 2016 Tryout Camp, battling for spots on the team’s roster for the 2016-2017 USHL season. 54 players were named to the camp’s All-Star teams, including 18 players who dressed for the Steel in 2015-2016.

Team Black’s perfect 2-0 record was led by 2015-2016 Steel top scorer Jake Jaremko. Jaremko, 19, scored both of Team Black’s regulation goals, as well as the shootout winner, in the victory over Team Silver. Newcomer Walker Duehr, who the Steel recently acquired from the Clark Cup Champion Tri-City Storm, had three assists on the day for Team Black. Linemates on Monday, Jaremko and Duehr are each committed to Minnesota State University (Mankato). Justin Robbins made saves on both shootout attempts that he faced to seal the victory over Team Silver, and brother Adam Robbins scored the game-winner against Team Red.

Team Silver’s scoring was led by defenseman Reilly Walsh. The Harvard commit, whose rights were acquired by the Steel via trade from Tri-City last month, recorded two consecutive goals in the final game of the day, including an unassisted power play tally. Greg Printz, who appeared in six games for Chicago in 2015-2016, and like Hakkarainen is committed to Providence, registered two goals and one assist.

Scouts from all over, including many NCAA Division I schools, were on hand to take in the action and evaluate talent.