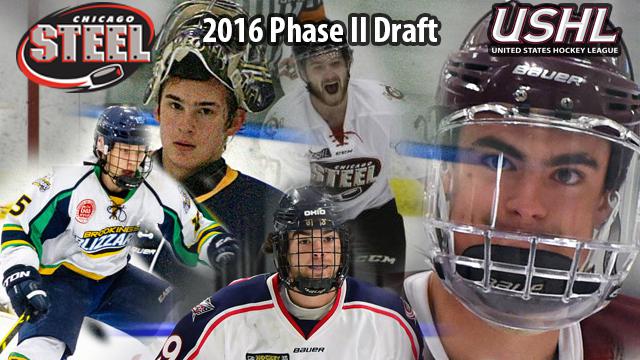 GENEVA, ILLINOIS – The 2016 USHL Draft concluded Tuesday with Phase II, as teams were allowed to fill their rosters with available players born between 1996 and 2000. The Chicago Steel made 17 selections in Phase II, including 10 forwards, five defensemen and two goaltenders. All players drafted will be extended invitations to the Steel’s Tryout Camp in June.

“We’re very excited with how today went,” Steel General Manager Ryan Bennett said following the conclusion of the Phase II Draft. “We got bigger, we were able to draft some very high-end imports and we feel that we have a lot of talented players that can make our team.”­­

The Steel’s second 1st Round selection was used on a familiar face. Forward Johnny Walker, who played three games for Chicago in 2015-2016, was drafted 11th Overall. Walker scored an exciting shootout winner for Chicago in a Dec. 10 home game vs. Youngstown. Walker, a Phoenix native, split the remainder of his third junior season between Minot and Topeka, each of the NAHL. The 6-foot, 190-pound right wing is committed to Arizona State University (Independent).

After a couple rounds without picks, Chicago got back to work in the 6th Round by taking Aaron Grounds from Team Wisconsin with the 84th Overall selection, a center with excellent skating ability and size (6-2, 170). The Steel then scooped up their first defenseman of the Phase II Draft, Jay Powell, a 6-foot-6 stay-at-home defenseman with a mean streak from Nashville, Tenn.

In Round 8, Chicago looked to the crease for the first time in this year’s USHL Draft, choosing North Jersey’s Justin Robbins, who led the nation in 16U wins (66) and was in the top 5 in the T1EHL in GAA (1.53) and save percentage (.938), showing quickness and textbook form. They’d stay with the back end in Round 9, selecting goaltender Jake Kucharski, who posted a 1.77 GAA and .917 save percentage in 14 regular season games this season with the Esmark Stars (NAPHL).

Chicago Steel 2016 USHL Phase I Draft Picks by the Numbers

The Steel’s 2016 Tryout Camp will take place at Fox Valley Ice Arena June 10-13 and is by invitation only. The camp includes a Futures Game and an All-Star Game, which will be open to the public. Details will be announced at a later date.