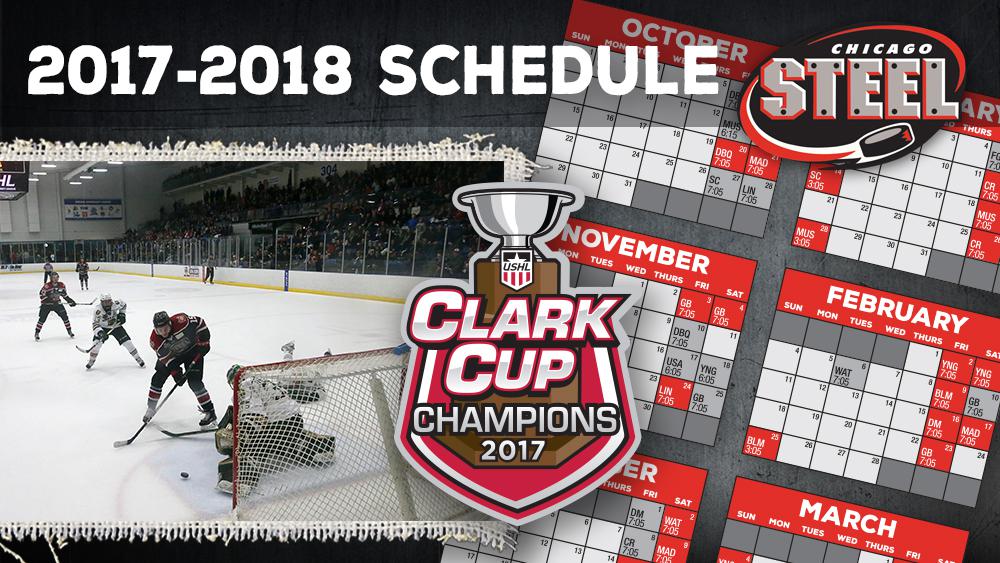 One night prior to the Home Opener, the Steel start the season on the road Friday, Oct. 6 with a 7:05 p.m. contest at the Dubuque Fighting Saints, the team Chicago defeated in the 2017 Eastern Conference Final.

Five months after winning the Clark Cup in overtime of a winner-take-all Game 5 of the Clark Cup Final, the Steel return to the site of the Championship, Tyson Events Center in Sioux City, Iowa, on Friday, Oct. 27 for the first of two meetings with the Sioux City Musketeers. The Musketeers will visit Chicago on Sunday, Jan. 14.

Chicago hosts rival Green Bay for a weekend set on Nov. 3-4, taking place during the 2017 CCM World Hockey Invite Chicago, the largest youth hockey tournament in the world all in one major city. The back-to-back home games are a rarity early in the season as the Steel play 14 of their first 22 games on the road.

November also features a post-Thanksgiving matchup against the Lincoln Stars on Friday, Nov. 24 before December opens with a pair of Saturday night matchups against Waterloo (Dec. 2) and Madison (Dec. 9).

The home schedule heats up after the Christmas holiday as the Steel host a pair games in the heart of the holiday season, December 30 and 31. The New Year’s Eve game is the first of seven Sunday home games this season with a family-friendly puck drop of 3:05 p.m.

The busiest stretch at home will take place from Jan. 14 through March 4 when 15 out of 18 games will be played on home ice. The stretch features at least one home game every weekend for eight stretch weeks, with 11 different teams visiting the Fox Valley Ice Arena and culminating in an all-home weekend against Omaha, Sioux Falls, and Youngstown on March 2, 3, and 4.  The weekend begins the busiest month of the season for Chicago, as the Steel play 13 contests during March.

April features a weekend trip to Youngstown followed by a home and home with Bloomington to end the season, with Chicago hosting the Friday night contest as its 30th and final home regular season game on April 13.

The team’s full 2017-2018 Promotional Schedule will be released later this summer, including fan-favorite festivities such as Chicago Blackhawks Night, Teddy Bear Toss, Full-Team Autograph Sessions and much more.

Chicago’s exhibition schedule, including games at the 2017 USHL Fall Classic in Cranberry Twp., Pa., will be announced soon.

Flexible season ticket plans are available with packages starting at just five games and allow fans to choose the games they wish to attend. Full season tickets start at just $8 per game.  Group and suite tickets will go on sale in the coming weeks, and the Steel will soon announce its public on-sale date for 2017-2018 single game tickets.