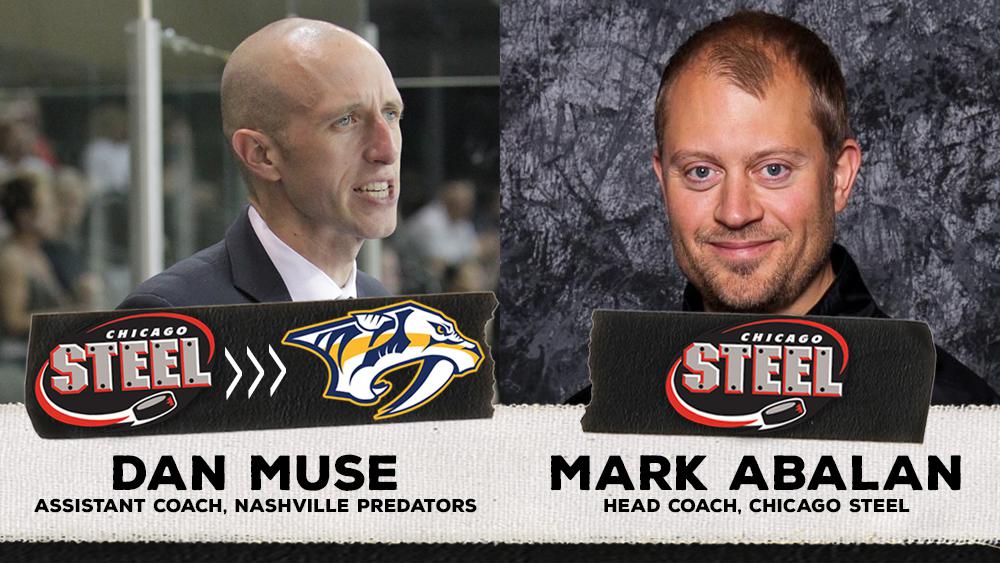 Muse, who turns 35 today, heads to the NHL after leading the Steel to the 2016-2017 Clark Cup Championship, the first in team history. Under Muse, the Steel also set team records in 2016-2017 for wins (38) and points (81) while qualifying for the playoffs for the first time in nine seasons and winning their first Eastern Conference title. 23 players from the 2016-2017 Championship roster have earned NCAA commitments.

“I am extremely grateful for the opportunity that Larry Robbins gave me two years ago to become the head coach of the Chicago Steel,” said Muse. “I am proud of what this organization has built over the past two years and I will cherish the memories and relationships that my family and I have made. Working with our players, staff, billets and fans every day was a privilege and the memory of those players celebrating the organization's first Clark Cup championship is one I will cherish forever.”

“We measure success in three ways: the achievements of the team, the development of the players and the advancement of our professional staff,” said Chicago Steel owner Larry Robbins. “Dan’s leap from the USHL to the NHL is the fitting culmination to a season that brought our first Clark Cup Championship, fostered tremendous player development and advanced our two assistant coaches to NCAA Division I coaching positions. We are forever grateful to Dan for laying the foundation as we pursue sustained excellence on and off the ice, and we wish him all the best in Nashville.”

“Dan comes to us as a successful young coach that brings great energy and passion to the game,” said Laviolette. “He has worked his way up through the coaching ranks, first winning an NCAA title at Yale in 2013, then taking a Chicago team that had missed the playoffs eight straight seasons and turned them into the Clark Cup champions in just two seasons. We are excited to welcome him to the organization and look forward to his contributions to the coaching staff.”

“I am excited and humbled by the opportunity that the Nashville Predators have offered me and I can't wait to get started,” said Muse. “I would not be in a position to be offered a job like this if it were not for the Chicago Steel.”

Mark Abalan takes over as Head Coach of the Steel after joining the organization last month as the team’s Associate Head Coach. Abalan, who spent five years on the bench with the USHL’s Sioux City Musketeers from 2011-2016, served as a head coach of the Boys U16 team at the prestigious Shattuck-St. Mary’s prep school in Faribault, Minn.

“We recruited Mark to join our staff as the heir apparent to Dan Muse knowing the likelihood that Dan would receive opportunities to coach professional hockey players in the near-future,” said Robbins. “Mark is passionate about hockey and his players, infuses pace and energy into practices and games, is a gifted tactician, has a thirst for knowledge and has a strong track record of elite player development. Mark’s knowledge of the USHL combined with his prior head coaching experience at a legendary hockey program position him for great success as we relentlessly pursue championships.”

Abalan, 41, led Shattuck St. Mary’s to a 41-10-4 record in 2016-2017 and an appearance in the USA Hockey U16 National Championship Game. He will be making his USHL head coaching debut this fall with the Steel.

“I'm grateful for this opportunity and thank Larry Robbins and the Steel organization for their belief in me," said Abalan. "I'm honored and excited to build upon the culture of winning that has been established by Coach Muse over the last two seasons. I can't wait to embark on this journey with our group and develop a team that competes and works every night.”

Abalan, his wife Missy, and their two daughters are in the process of relocating to Geneva.

“I am looking forward to watching the Steel organization continue to grow under Mark’s leadership,” said Muse. “He coaches with passion, has an amazing drive, an understanding of how to develop players, and is a person of outstanding character."

Muse’s ascension in the coaching ranks marks the third time this summer that a Steel coach has progressed to a higher level of hockey. Earlier this summer, Steel coaches Dallas Steward and Peter Mannino accepted assistant coaching roles at the NCAA Division 1 level, with Steward heading to Michigan Tech University and Mannino joining the University of Nebraska-Omaha staff.

The Steel are in the process of filling the now-vacant coaching position left in the wake of Muse’s departure and Abalan’s promotion. Earlier this summer, the team announced the hiring of Mike Garman as an Assistant Coach, and Dave Rogowski as Director of Hockey Operations.

The defending Clark Cup Champions will open the 2017-2018 season on Friday, Oct. 6 at Dubuque, before returning to Chicago for the home opener on Saturday, Oct. 7 vs. Team USA (U17) at the Fox Valley Ice Arena in Geneva, Ill.