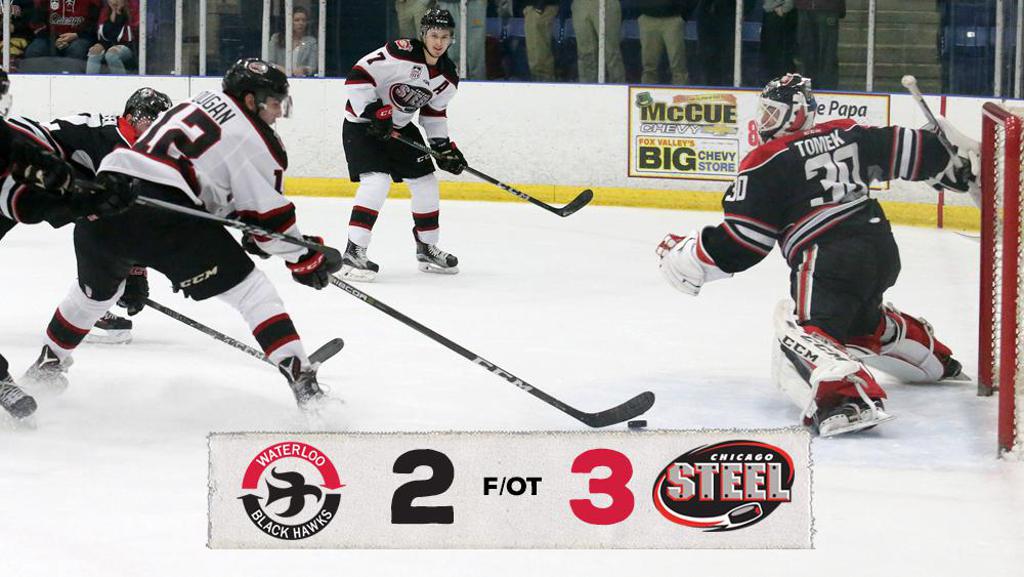 Goaltender Oskar Autio made 30 saves as the Steel snapped a four-game losing skid (0-2-1-1).

After being shutout in two straight games, the Steel found the back of the net just over three minutes into the contest. Samuel Bucek skated down the right wing and fed a pass to McLaughlin, who tallied his eighth goal of the season as his shot from the left side beat Waterloo netminder Matej Tomek on the stick side.

Waterloo tied the game later in the opening period when Garrett Klee tipped a beautiful Matej Blumel pass from below the goal line at 16:28.

The Black Hawks took their first lead of the game at 12:21 of the second period with a power play marker. A shot from Winnetka, Ill. native Jack Drury from the top of the right circle found a way into the back of the net for his fourth goal of the season.

Dugan then knotted the game at two just over two minutes later. The Vegas Golden Knights prospect sent a backhanded shot from below the left circle past Tomek, a Philadelphia Flyers prospect.

Neither team found the net in the third period and the game went into overtime. It was the fourth straight home game for the Steel to require OT. At 1:08 of the extra frame, Dugan completed a give-and-go on a 2-on-1 rush with Lillibridge, who dished a pass from the left wing to the top of the crease, where Dugan redirected the feed with a forehand shot through Tomek’s five-hole.

Dugan’s second tally of the night was his team-leading 13th goal of the season. Lillibridge now has 15 assists this season, second-most in the USHL.

The Steel return home on Saturday, Dec. 9 to host the Madison Capitols for the annual Teddy Bear Toss presented by Geneva Family Dental, where fans are encouraged to throw new, unwrapped stuffed animals on the ice following the Steel’s first goal of the game. All stuffed animals will be donated to Marklund. Fans can join the team on the ice for a post-game Skate with the Steel. For more information on the Chicago Steel, or to purchase tickets, call 855-51-STEEL, stop by the Box Office at Fox Valley Ice Arena or visit ChicagoSteelHockeyTeam.com.