Steel players to compete in January showcase in Nebraska 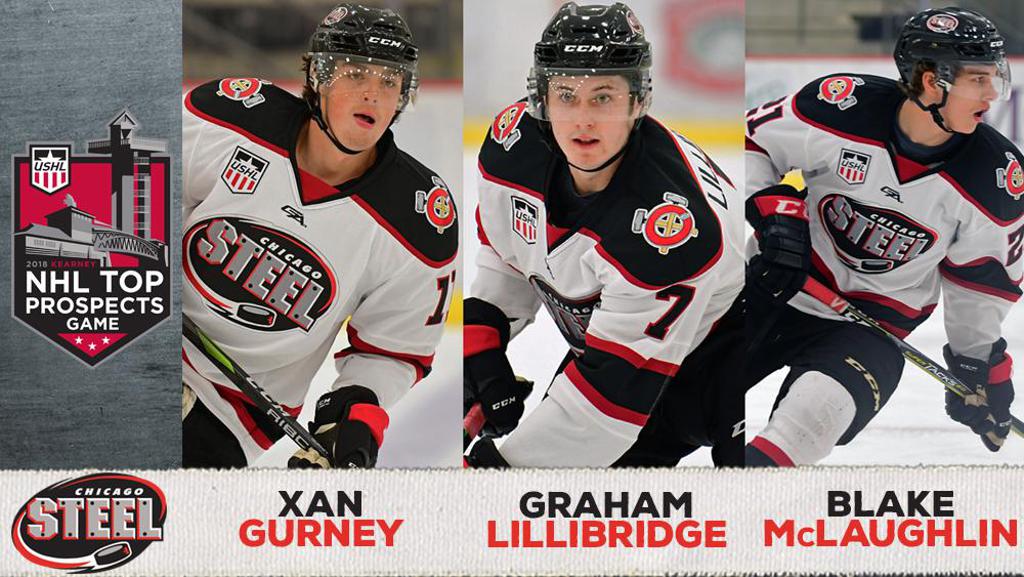 GENEVA, ILLINOIS – The United States Hockey League (“USHL”) and NHL Central Scouting announced Wednesday the roster of players selected to compete at the 2018 USHL/NHL Top Prospects Game on Tuesday, Jan. 9 in Kearney, Neb. Chicago Steel left wing Blake McLaughlin, and defensemen Xan Gurney and Graham Lillibridge, were among the 40 players named to the game, and each will compete for Team East. Selections were made by NHL and USHL general managers and scouts from among 2018 NHL Draft-eligible USHL players.

Lillibridge, an alternate captain for the Steel, leads all USHL defensemen in points (18). The 18-year-old is in his third USHL season, and second with his hometown (Geneva, Ill.) Steel, after playing his rookie year (2015-2016) as a tender with the Muskegon Lumberjacks. Lillibridge, a Yale University (ECAC) commit, was selected last season as USHL Co-Scholar Athlete of the Year, along with being named to the USHL All-Academic Team. Lillibridge played a significant role in the Steel’s first-ever championship, including tallying the primary assist on Tyler Gratton’s Clark Cup-clinching overtime goal in Game 5 of the 2017 Clark Cup Final.

McLaughlin, 17, currently sits in fourth in the USHL scoring race with 21 points (8+13) through 17 games. The University of Minnesota (Big Ten) commit was recently given a ‘B’ rating by NHL Central Scouting as a 2nd/3rd round candidate for the upcoming NHL Draft. McLaughlin helped lead the Grand Rapids Thunderhawks to a Minnesota Class 2A State Championship in March, and was named to the All-Tournament Team, before returning to the Steel to capture the Clark Cup in May.

Gurney also won a pair of titles last season, including the Clark Cup with the Steel, and an HPHL Championship with Compuware. The 6-foot-3 native of Grosse Ile, Mich. appeared in one regular season game for the Steel in 2016-2017 before playing in 10 games in the Clark Cup Playoffs. Gurney, 17, is committed to Western Michigan University (NCHC).

This season’s Top Prospects Game is hosted by the Tri-City Storm. 2018 marks the sixth year of the event.  Previous hosts of the USHL/NHL Top Prospects Game include the Muskegon Lumberjacks (2012 and 2013), Dubuque Fighting Saints (2015), Omaha Lancers (2016) and Sioux Falls Stampede (2017).

The Steel return home on Saturday, Dec. 9 to host the Madison Capitols for the annual Teddy Bear Toss presented by Geneva Family Dental, where fans are encouraged to throw new, unwrapped stuffed animals on the ice following the Steel’s first goal of the game. All stuffed animals will be donated to Marklund. Fans can join the team on the ice for a post-game Skate with the Steel. For more information on the Chicago Steel, or to purchase tickets, call 855-51-STEEL, stop by the Box Office at Fox Valley Ice Arena or visit ChicagoSteelHockeyTeam.com.