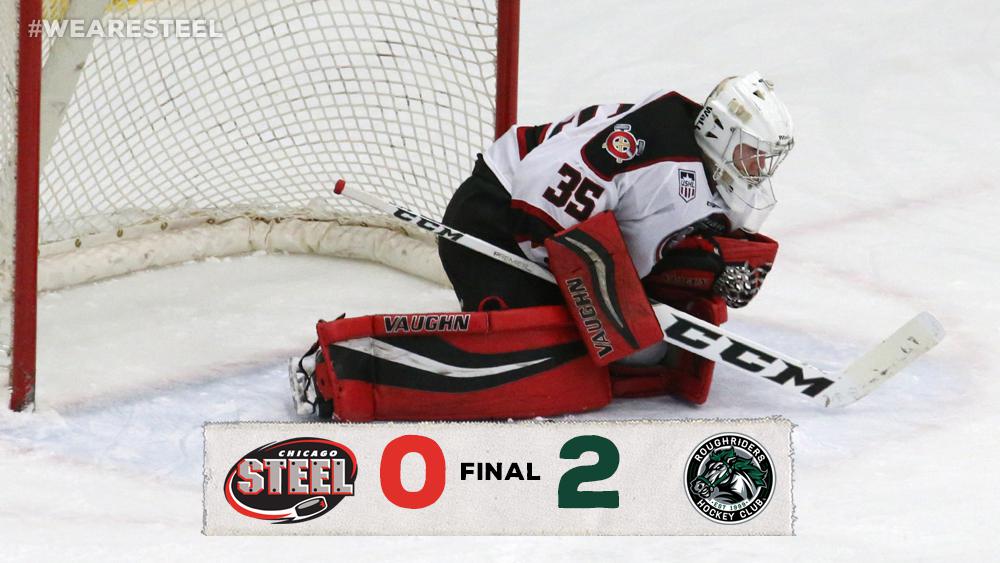 The shutout was the first of Pietila’s USHL career. Steel goaltender Oskar Autio stopped 30 in the first of five meetings this season between the two Eastern Conference foes.

Timmons opened the scoring just under five minutes into the game in what eventually turned out to be the game-winning goal. On a partial breakaway, the right wing skated to the top of the crease and fired a puck low glove side past Autio at 4:38.

The Steel had a tough time generating offensive chances and were limited to just four shots on goal in the second period and the 1-0 deficit remained after forty minutes of play.

In the third period, the Steel received their first power play opportunity of the game in the form of a full two-minute 5-on-3 advantage. Chicago moved the puck well early in the two-man advantage, but were limited in scoring chances, and the RoughRiders were able to kill off the opportunity. The Steel later received another power play chance, but were unable to convert.

Autio was pulled with under 90 seconds remaining in the third, but Timmons took advantage of the empty net, forcing a turnover, skating down the left wing, and scoring the game’s second and final goal with 1:13 remaining.

Cedar Rapids outshot Chicago by a 32-25 margin. Both teams finished 0-for-3 on the power play.

The Steel return home Saturday, Dec. 9 to host the Madison Capitols for the annual Teddy Bear Toss presented by Geneva Family Dental, where fans are encouraged to throw new, unwrapped stuffed animals on the ice following the Steel’s first goal of the game. All stuffed animals will be donated to Marklund. Fans can join the team on the ice for a post-game Skate with the Steel. Skate rental is available from the Fox Valley Ice Arena for $4. For more information, or to purchase tickets, call 855-51-STEEL, stop by the Box Office at Fox Valley Ice Arena or visit ChicagoSteelHockeyTeam.com.