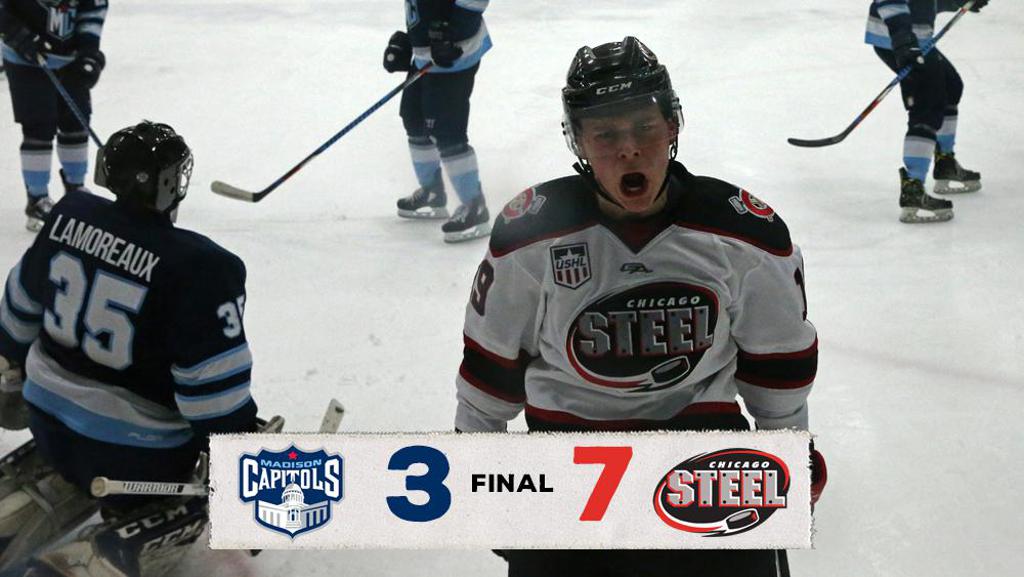 Robbie Stucker triggered the annual Teddy Bear Toss presented by Geneva Family Dental, scoring Chicago’s first goal of the game, as over 650 bears rained down on the ice. The stuffed animals will be donated to Marklund, a Geneva-based nonprofit organization that serves infants, children, teens and adults with serious and profound developmental disabilities and special healthcare needs. One Cyclones Amateur Hockey Association team, the 10U Squirt A1 team, tossed 277 teddy bears.

After registering just three goals in its last four games, the Chicago offense exploded in the second period, as the Steel became the fourth USHL team this season to tally five goals in a single period.  Samuel Bucek (1+2) recorded three points in the contest, while Baker Shore (1+1), Aaro Vidgren (1+1), Jeremie Bucheler (0+2) and Austin Magera (0+2) each put up two points on the night. Goaltender Justin Robbins made 29 saves to earn his first USHL victory.

Alec Broetzman got the Capitols on the board first in the contest with a power play goal.  Broetzman’s shot was from the right half wall at 6:08 of the first period.

Robbie Stucker made the bears rain down at the 12:01 mark, tying the game at 1. The Columbus Blue Jackets prospect fired a shot from the right point for his third goal of the season.  Ryan O’Reilly restored the Capitols’ lead 41 seconds later as he crashed the net and jammed the puck in from the top of the crease for his 12th goal of the season.

The Steel took their first lead of the night at 5:29 of the second period courtesy of Vidgren. Madison netminder Joey Lamoreaux got a piece of the Finnish forward’s shot from the left circle, but the puck trickled over the goal line for Vidgren’s seventh goal of the season.

Shore extended the Steel lead to 4-2 on the power play as his one-timer from the left hashmarks found the back of the net at 9:07. Shore’s eighth tally of the year was set up on a quick pass from Bucek.

Just 33 seconds later, Cole Kodsi’s shot from the right half-wall was deflected in by Brett Budgell to give the Steel a 5-2 lead at 9:40. Kodsi recorded his first career USHL point with the lone assist. The goal ended Lamoreaux’s night, as Dryden McKay took over the Capitols’ net.

The Steel power play cashed in for the third time in the game at 14:25. Abruzzese put home another rebound from below the right circle for his second goal of the night and a 6-2 Steel lead.

Bucek then brought the puck into the Madison zone and sent a shot from the right hashmarks into the back of the net for his sixth goal of the campaign to put Chicago up 7-2 and cap the five-goal period. The seven goals tie a season-high for the Steel, set against Madison Oct. 21.

Chicago outshot Madison by a 41-32 margin.

The Steel will take on the Muskegon Lumberjacks Dec. 15 and 16 at 6:15 p.m. CT, and following the USHL holiday break, the Cedar Rapids RoughRiders on Dec. 27 at 7:05 p.m. Steel games are carried live on Mixlr (free audio) and HockeyTV (iPPV). For more information, visit ChicagoSteelHockeyTeam.com/broadcast.

The Steel return home Saturday, Dec. 30 to host the Dubuque Fighting Saints at 7:05 p.m., featuring a Youth Replica Jersey Giveaway presented by McCue Chevy for the first 500 kids 14 and under. For more information, or to purchase tickets, call 855-51-STEEL, stop by the Box Office at Fox Valley Ice Arena or visit ChicagoSteelHockeyTeam.com.