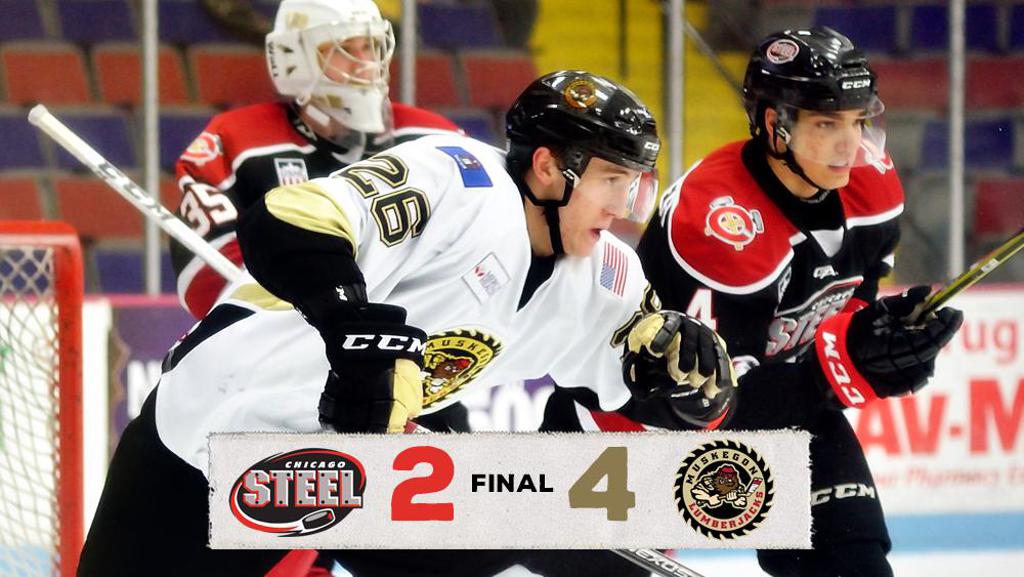 Del Gaizo opened the scoring with a one-timer from his brother, Marc, at 6:36 of the first period. The shot from the bottom of the right circle made its way past the glove side of Autio. The lead was extended to 2-0 with 29 seconds remaining in the frame, as Del Gaizo fired a low shot from the slot for his team-leading 12th tally of the season.

Kodsi got the Steel on the board five minutes into the second period with a backhanded shot from the slot. The Michigan State University commit has registered a point in each of the last two games. Aaro Vidgren recorded the lone assist.

The Steel tied the game, 2-2, at 9:23 of the third period. Austin Magera brought the puck into the Muskegon zone down the left wing and fed a cross-ice pass down low to Samuel Bucek, who snapped his seventh goal of the season.

But the tie was short-lived. Just 55 seconds later, the Lumberjacks regained the lead. After a Muskegon shot bounced off the side of the Steel cage, Benito Posa tallied his first goal of the season by flipping a shot over Autio from the right side of the crease.

Later in the third, Muskegon netminder Keegan Karki made a tremendous glove save on a shorthanded opportunity for Robbie Stucker, maintaining the one-goal lead. Emilio Pettersen then sealed the 4-2 victory for the Lumberjacks with 31 seconds remaining, scoring an empty-net goal from center ice.

Muskegon outshot Chicago by a 37-24 margin. The Steel denied both of the Lumberjacks’ power play opportunities, and went 0-for-5 on their own chances.

The Steel return home Saturday, Dec. 30 to host the Dubuque Fighting Saints at 7:05 p.m., featuring a Youth Replica Jersey Giveaway presented by McCue Chevy for the first 500 kids 14 and under. For more information, or to purchase tickets, call 855-51-STEEL, stop by the Box Office at Fox Valley Ice Arena or visit ChicagoSteelHockeyTeam.com.