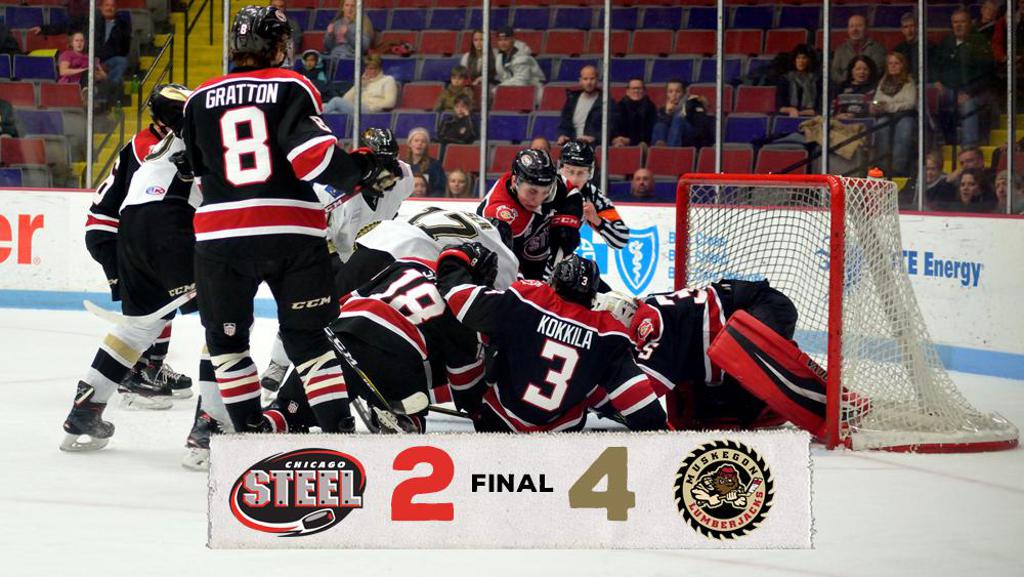 MUSKEGON, MICHIGAN — Wyatt Bongiovanni scored twice and for the second straight night, the Muskegon Lumberjacks (9-11-1-1, 20 pts.) defeated the Chicago Steel (11-7-1-2-, 25 pts.) by a score of 4-2 at L.C. Walker Arena. The Steel nearly overcame a 3-0 third period deficit but couldn’t find the equalizer in the team’s final game prior to the holiday break.

Bongiovanni scored his ninth goal of the season as he poked home the puck from the top of the crease at 1:33 of the first period. The goal not only gave the Lumberjacks the early lead, but also triggered Muskegon’s Teddy Bear Toss.

The Lumberjacks extended their lead to 2-0 at 1:14 of the second period. Collin Murphy’s shot from the left side of the crease trickled past Steel goaltender Justin Robbins for his first goal of the season.

At 11:20, Murphy’s shot from the high slot caught a piece of Robbins’ glove, but the puck bounced behind the Steel netminder. Anthony Del Gaizo found the loose puck and put it home for his 13th goal of the year and his third goal on the weekend to give Muskegon a three-goal lead.

The Steel got on the board at 1:15 of the third period. Aaro Vidgren tallied a power play goal as he put home a rebound past the glove side of Muskegon netminder Keegan Karki. The marker was the Finnish forward’s eighth goal of the season.

Derek Daschke brought the Steel to within a goal with just under six minutes to play in regulation. The Chicago captain sent a shot into the back of the net from the top of the right circle for his third goal of the year.

Chicago pulled its goalie with over two minutes to play and had several strong chances around the net, but were unable to capitalize. After Muskegon sent the puck deep into Chicago’s zone, Bongiovanni sealed the victory with an empty net goal with 2.8 seconds remaining.

The Steel return home on Saturday, Dec. 30 to host the Dubuque Fighting Saints at 7:05 p.m., featuring a Youth Replica Jersey Giveaway presented by McCue Chevy for the first 500 kids 14 and under. The following day, the Steel will host Muskegon in a 3:05 p.m. game on New Year’s Eve. The game marks the first Steel Family Sunday of the season, and after the game, fans are invited to participate in a post-game Skate with the Steel.  For more information, or to purchase tickets, call 855-51-STEEL, stop by the Box Office at Fox Valley Ice Arena or visit ChicagoSteelHockeyTeam.com.