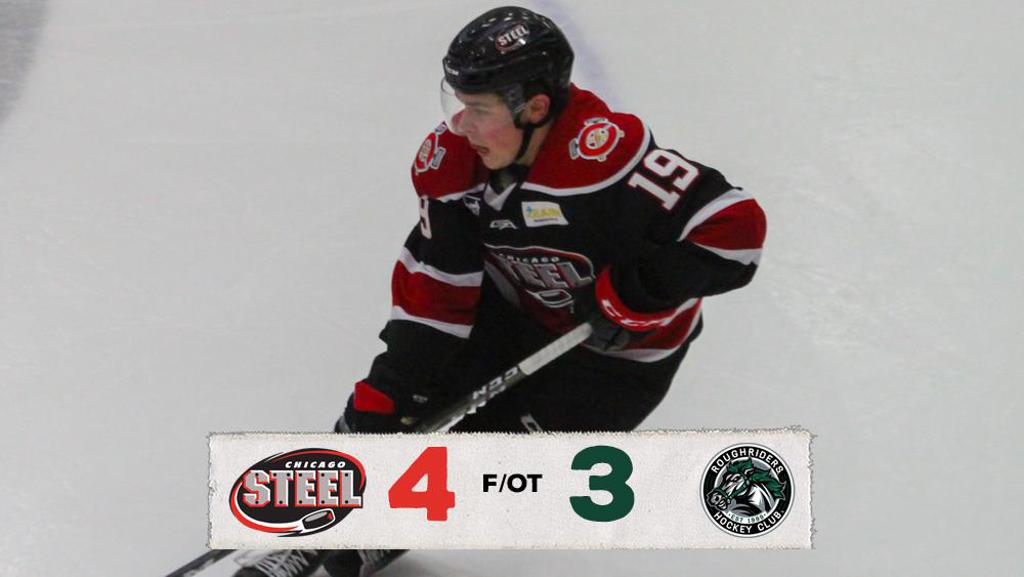 CEDAR RAPIDS, IOWA — Baker Shore scored the overtime game-winner on a give-and-go with Graham Lillibridge, and Jack Dugan tallied twice as the Chicago Steel (12-7-1-2, 27 pts.) defeated the Cedar Rapids RoughRiders (10-10-2-1, 23 pts.) by a score of 4-3 in overtime at Cedar Rapids Ice Arena.

Shore’s goal, coming 3:57 into the extra session, began with a feed from Blake McLaughlin at the right point. Shore flipped a cross-ice pass to Lillibridge and immediately cut to the net where Lillibridge found his stick through traffic for the game-winner.

Dugan, appearing in his first game since December 2 due to the World Junior A Challenge, tied the game in the third period, forcing the overtime session that saw the Steel dominate in puck possession time. McLaughlin and Lillibridge, also returning from the Challenge, each had an assist as the Steel snapped a six-game road winless streak. Chicago netminder Oskar Autio made 31 saves on 34 shots in the game.

The RoughRiders tallied the first goal of the contest at 4:57 of the first period. Liam Walsh gave Cedar Rapids the 1-0 lead with a shorthanded tally. Walsh brought the puck down the left side of the Steel zone and seemed to lose control of the puck as he angled towards the net. Walsh had enough strength to guide the puck past the stick of Autio.

The Steel tied the game early in the second period as Jordan Seyfert brought the puck from behind the net and fed a pass to Tyler Gratton at the top of the crease. Gratton put the puck home for his third goal of the season.

Chicago took its first lead of the game at 7:17 when Nick Abruzzese crashed the net and sent a pass to Dugan on the doorstep for his first goal of the night.

The Steel took a one-goal lead into the third period but Marek Valach tied the game at two for Cedar Rapids at 5:09 of the frame, snapping a shot into the back of the net from the right circle for a power play goal.

The RoughRiders regained the lead less than five minutes later as Valach tallied his second goal of the period, going top shelf from the left circle for his 10th goal of the year.

With just under six minutes to go, Chicago was awarded a penalty shot when a Cedar Rapids defenseman covered the puck in the crease, but Dugan was denied by Cedar Rapids goalie, and fellow Vegas Golden Knights draft pick, Jiri Patera. Moments later, Dugan tallied his second marker of the night at 14:24, sending in a wrister from the slot for his 15th goal of the season, tying the game and setting the table for the overtime theatrics.

The Steel return home on Saturday, Dec. 30 to host the Dubuque Fighting Saints at 7:05 p.m., featuring a Youth Replica Jersey Giveaway presented by McCue Chevy for the first 500 kids 14 and under. The following day, the Steel will host Muskegon in a 3:05 p.m. game on New Year’s Eve. The game marks the first Steel Family Sunday of the season, and after the game, fans are invited to participate in a post-game Skate with the Steel. For more information, or to purchase tickets, call 855-51-STEEL, stop by the Box Office at Fox Valley Ice Arena or visit ChicagoSteelHockeyTeam.com.