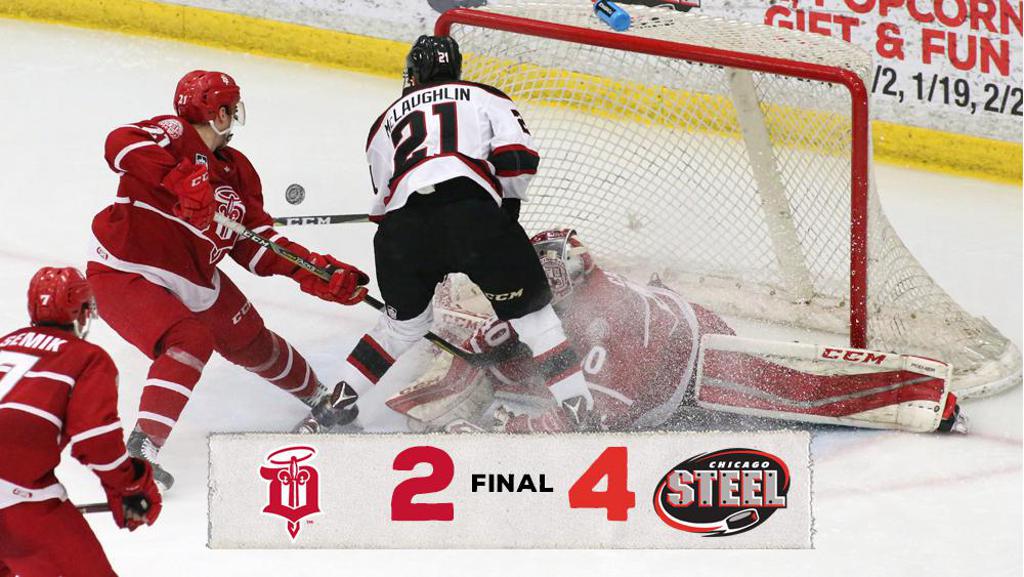 GENEVA, ILLINOIS — In a battle of teams near the top of the Eastern Conference standings, a strong, balanced effort from the Steel was the difference as Chicago (13-7-1-2, 29 pts.) completed a sweep of the four-game season series with Dubuque (12-8-3-1, 28 pts.) following a 4-2 victory Saturday night at Fox Valley Ice Arena.

The Fighting Saints scored first as Adam Tisdale drove to the front of the Steel net and redirected in a pass from Alex Steeves at 4:50 of the first period.

The lead, Dubuque’s only of the night, was short-lived as just 75 seconds later, the Steel tied the game when Spetz recorded his first career USHL goal. Tyler Gratton connected on a pass to the left point for Spetz, who fired a one-time rocket past Fighting Saints netminder Jaxon Castor.

Later in the period, Abruzzese tallied his third power play goal of December, scoring at 13:02 off a feed to the bottom of the left circle from Baker Shore.

Chicago held a 2-1 lead until the closing stages of the second period, when Dalton Hunter registered a power play rebound goal with 49 seconds remaining in the stanza.

McLaughlin’s goal, Chicago’s first shorthanded tally of the season, came at the 3:03 mark of the third period. The University of Minnesota commit picked up the puck along the left wing boards at center ice and raced ahead on a breakaway. His initial shot was denied by Castor, but McLaughlin was able to bat the rebound out of mid-air and into the back of the net for his ninth goal of the season.

Seyfert then recorded the game’s final goal, quickly cashing in on a sensational pass from the end wall from Robert Mastrosimone, and firing a shot from the bottom of the left wing over Castor’s shoulder.

Chicago outshot Dubuque 38-25. The Steel have won consecutive games for the first time since mid-November, and are now tied with the Green Bay Gamblers atop the Eastern Conference standings heading into a Sunday matinee with Muskegon.