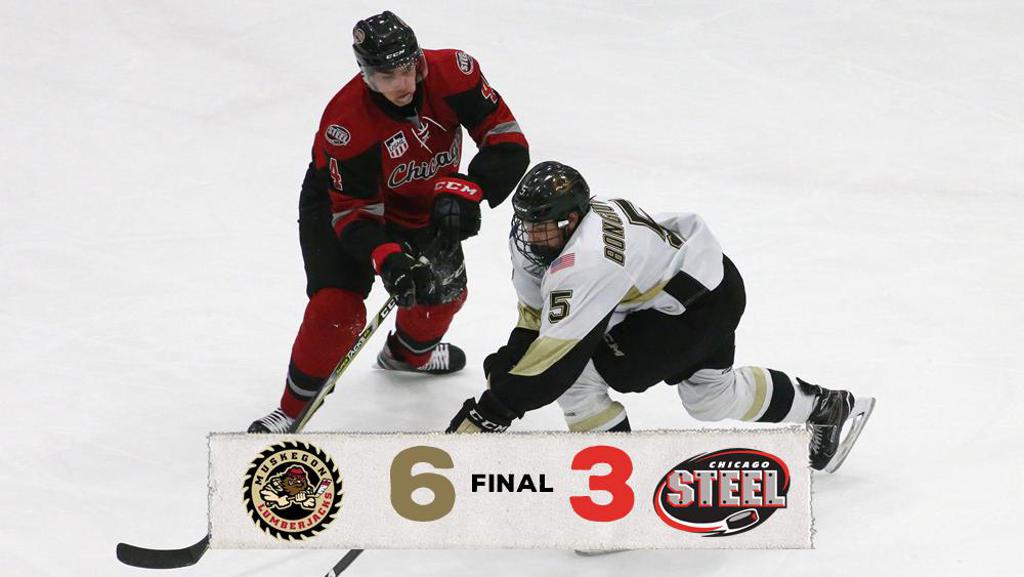 At 10:39 of the first period, Muskegon’s Benito Posa jammed in a rebound after Will Schlagenhauf’s initial shot was stopped by Steel netminder Oskar Autio. The goal was Posa’s third of the season and gave the visitors a 1-0 lead. It marked the seventh consecutive game in which Chicago has given up the opening goal.

The Lumberjacks extended their lead to 2-0 at 14:42. Colby Bukes’ shot bounced off the end boards and came right to Egor Afanasyev near the bottom of the left circle. Afanasyev fired the puck past the blocker side of Autio.

Pettersen put Muskegon up by three just 15 seconds into the second period, sliding a backhanded shot in along the ice from the top of the crease.

The Steel got on the board less than two minutes later when Jack Dugan recorded a power play goal, firing a top-shelf shot from the left circle. Baker Shore and Graham Lillibridge recorded the assists on Dugan’s team-leading 16th goal of the season.

Shore then scored a goal of his own at 10:19. Jordan Seyfert beautifully dropped the puck to Shore in the slot and the Harvard commit brought the puck in, made a nifty move down low, and slid the puck under Keegan Karki’s glove. Shore’s 10th of the season cut the Steel deficit to 3-2.

At 18:31, Bukes restored the two-goal Muskegon lead during a power play, plus a delayed call against the Steel. Bukes fired a shot through traffic from the high slot that beat Autio over the shoulder.

The Steel battled back to within a goal early in the third period. Aaro Vidgren fired a high shot from the left circle to record his ninth tally of the season at 3:22.

Midway through the third period, Lumberjacks defenseman Nash Neinhuis was called for a five-minute major after slashing Seyfert at center ice. The Steel were not able to take advantage of the opportunity, and the Lumberjacks added empty net goals from Matej Pekar at 18:39, and Pettersen at 19:12, to record the three-goal win.

Both teams fired 23 shots on net in the contest. The Lumberjacks have now won six consecutive games.

The Steel start 2018 on the road with a pair of games in North Dakota against the Fargo Force. Faceoff on Friday, Jan. 5, and Saturday, Jan. 6 is set for 7:05 p.m. Steel games are carried live on Mixlr (free audio) and HockeyTV (iPPV). For more information, visit ChicagoSteelHockeyTeam.com/broadcast.