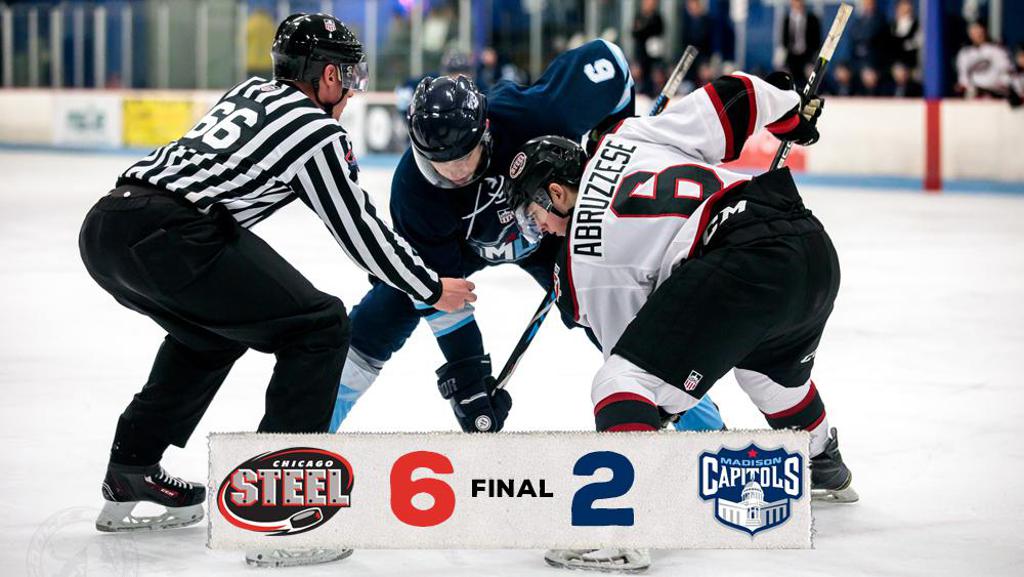 MIDDLETON, WISCONSIN — Derek Daschke and Aaro Vidgren each recorded two goals Saturday as the Chicago Steel (18-12-1-2, 39 pts.) soared to a 6-2 victory over the Madison Capitols at Bob Suter’s Capitol Ice Arena. Justin Robbins made 31 saves in net for the Steel.  Madison came into the contest red hot, but Chicago’s regulation win snapped a 10-game point streak for the Capitols (15-15-1-2, 33 pts.).

The Chicago offense continued its strong pace in January. The Steel have scored at least six goals in five of their last seven games. Samuel Bucek and Robbie Stucker also registered goals for the Steel.

After a scoreless first period, Steel forward Nick Abruzzese connected a pass to Bucek to open the scoring at 4:57 of the second period. From the slot, Bucek fired a short-side shot bar-down for his 10th tally of the season. Just 95 seconds later, Vidgren also recorded his 10th goal of the campaign, putting the Steel ahead 2-0 off an assist from C.J. Walker.

Later in the period, Daschke notched a pair of goals from the left point with similar shots through traffic and into the net. The first one, scored at 17:01, ended the night for Madison netminder Joey Lamoreaux. Daschke’s second tally, the first one past goaltender Dryden McKay, was scored at 19:38 to make it 4-0 Chicago.

Madison defenseman Jared Kucharek ended Robbins’ shutout bid with a goal from the left point just before the second intermission, and the Capitols climbed within two when Verners Egle scored from the left circle at the 6:22 mark of the third period.

The Steel closed things out thanks to a power-play goal from Vidgren at 13:55 when he fired a shot over McKay’s left shoulder for a 5-2 lead. With under four minutes remaining, Stucker registered an empty netter from 170 feet while shorthanded.

Madison outshot Chicago, 33-23. The Steel went 1-for-4 on the power play and 4-for-4 on the penalty kill. Chicago improved to 3-1-0-0 against Madison, and Saturday’s win marked the first time the road team has won in the season series, which concludes on Saturday, Feb. 17 at Fox Valley Ice Arena in Geneva, Ill.

The Steel have scored 14 goals through two games this weekend and return home to complete a three-game weekend with a Sunday matinee against the Muskegon Lumberjacks. The 3:05 p.m. faceoff is Dr. Seuss Day on a Steel Family Sunday. Fans are invited to stick around after the game for full-team post-game autographs. For more information, or to purchase tickets, call 855-51-STEEL, stop by the Box Office at Fox Valley Ice Arena or visit ChicagoSteelHockeyTeam.com.