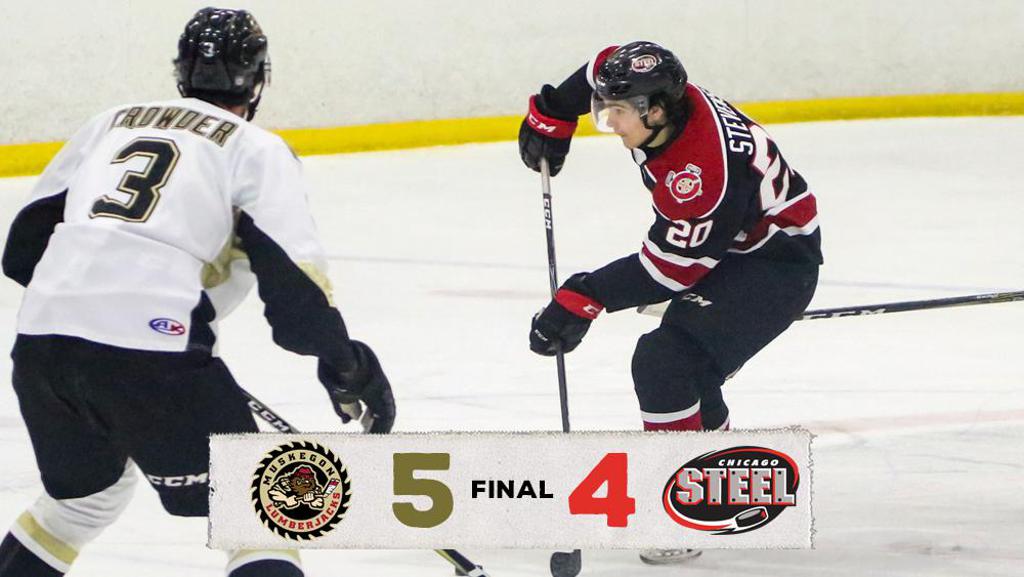 Chicago’s Sam Stevens opened the scoring at the 6:17 mark of the first period, spinning behind the goal line and banking a shot off the glove of Muskegon netminder Zach Borgiel. The goal was Stevens’ first on home ice this season, and Tim Clifton recorded his first career USHL point with the goal’s lone assist.

The Lumberjacks tied the game late in the first period thanks to a power-play goal from defenseman Alex Yakovenko, who fired a shot over Steel goaltender Oskar Autio’s glove from the left circle for his first career USHL tally.

The seesaw action continued early in the second period. Muskegon’s Anthony Del Gaizo notched his USHL-leading 27th goal of the season at the 0:17 mark, then Jordan Seyfert bounced a rebound in from the top of the crease just 1:49 later, tying the game, 2-2.

The Lumberjacks regained the lead later in the period when Marc Del Gaizo fired a shot off a Steel defender’s leg for a power-play tally, giving the visitors a 3-2 lead heading into the second intermission.

Chicago’s C.J. Walker tied the game, 3-3, at the 1:50 mark of the third period, deflecting in a point shot from Robbie Stucker.

Less than three minutes later, Muskegon center Jachym Kondelik slid the puck in on the stick-side for a power-play goal but Chicago once again found the equalizer. Robert Mastrosimone sniped a shot from the top of the left circle, far-side, beating Borgiel over the glove at 13:42.

On a four-minute power play late in the game, Del Gaizo recorded the game-winning goal, as the defender stickhandled his way down the slot and snuck a shot in low from the top of the crease, beating Autio on the stick side.

Chicago outshot Muskegon by a 43-28 margin. The Steel registered 18 goals over the three-game weekend, going 2-1-0-0.

The Steel are home for two games next weekend against the Youngstown Phantoms. Friday night’s game is a Meijer Kids Day — for just $10, kids 12 and under receive an Attack Preferred Ticket, popcorn, Steel light-up wand and post-game autographs. Saturday’s game marks the Steel’s annual Chicago Blackhawks Night, featuring an appearance by Stanley Cup Champion Ben Eager. Eager will sign autographs and take pictures with fans during the game, while also dropping the ceremonial first puck. Also scheduled to appear are Blackhawks mascot Tommy Hawk and the Blackhawks Ice Crew. For more information, or to purchase tickets, call 855-51-STEEL, stop by the Box Office at Fox Valley Ice Arena or visit ChicagoSteelHockeyTeam.com.