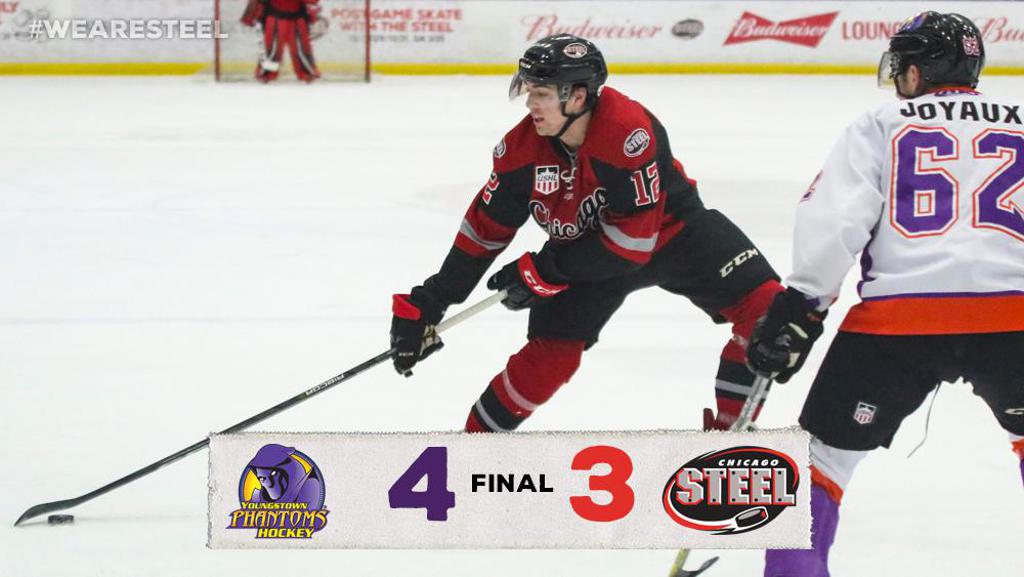 GENEVA, ILLINOIS — Mike Regush scored twice for the Phantoms, including the game-winning tally in the third period, and the Youngstown Phantoms (17-14-4-1) defeated the Chicago Steel (18-14-1-2) 4-3 in the first game of back-to-back contests at Fox Valley Ice Arena.

Baker Shore led the Steel with three points (1+2) while Jack Dugan and Aaro Vidgren each added a goal and an assist.

Youngstown opened the scoring at 7:21 of the first when Regush corralled a loose puck in front of the net and slipped it around the outstretched leg of Steel netminder Oskar Autio. Chase Gresock and Matt Barry were awarded assists on the effort.

Shore tied the game for Chicago after a slick, no-look, behind-the-back feed from Blake McLaughlin below the goal line with 6:53 to play in the first.

Vidgren broke the tie with 39 seconds remaining in the first, and one second left on the power play. Vidgren, who was alone in the slot, received a pass from Shore and slipped the puck through the five-hole of Youngstown goaltender Ivan Prosvetov. The assist gave Shore his ninth multi-point game of the season and pushed Vidgren to three goals in the last three games. Graham Lillibridge added the secondary assist on the play.

Jack Malone tied the game for Youngstown with 6:55 to play in the second. Dalton Messina started the play with a shot from the glove side of Autio that came off his right pad and found Malone alone in front of the net. Max Ellis, who led the Phantoms with three points last time the teams met, also picked up an assist on the goal.

Youngstown took its second lead of the game with 3:40 remaining in the second period when Tommy Parrottino sent a slap shot past Autio’s glove with the Phantoms on a 5-on-3 advantage. Michael Joyaux and Barry collected assists on the play.

The Phantoms extended their lead to two with 4:39 to play in the third period when Gresock entered the zone and pushed the puck along to Barry, who dropped it for Regush to fire a wrist shot over Autio’s glove for his second goal of the night.

The Steel pulled within one with 2:38 remaining in the game. With Autio pulled, Shore fired a shot from the boards, which led to the puck lying around the crease. After Vidgren got a look on net, Shore collected the puck in the slot and cycled a pass over to Dugan, who fired a wrist shot through traffic and past Prosvetov’s glove.

The Steel continued to pressure in the game’s final minutes but were unable to find the equalizer.

Youngstown outshot Chicago, 30-26, with half of the Steel’s shots being registered in the third period. Barry notched three assists for the Phantoms. Vidgren now has three goals and three assists over the Steel’s last three games.

The two teams rematch Saturday at Fox Valley Ice Arena on the Steel’s annual Chicago Blackhawks Night. The 7:05 p.m. game will feature an appearance by Stanley Cup Champion Ben Eager, who will sign autographs and take pictures with fans during the game, while also dropping the ceremonial first puck. Also scheduled to appear are members of the Blackhawks Ice Crew, and fans can enjoy great prizes and giveaways from the Blackhawks. For more information, or to purchase tickets, call 855-51-STEEL, stop by the Box Office at Fox Valley Ice Arena or visit ChicagoSteelHockeyTeam.com.