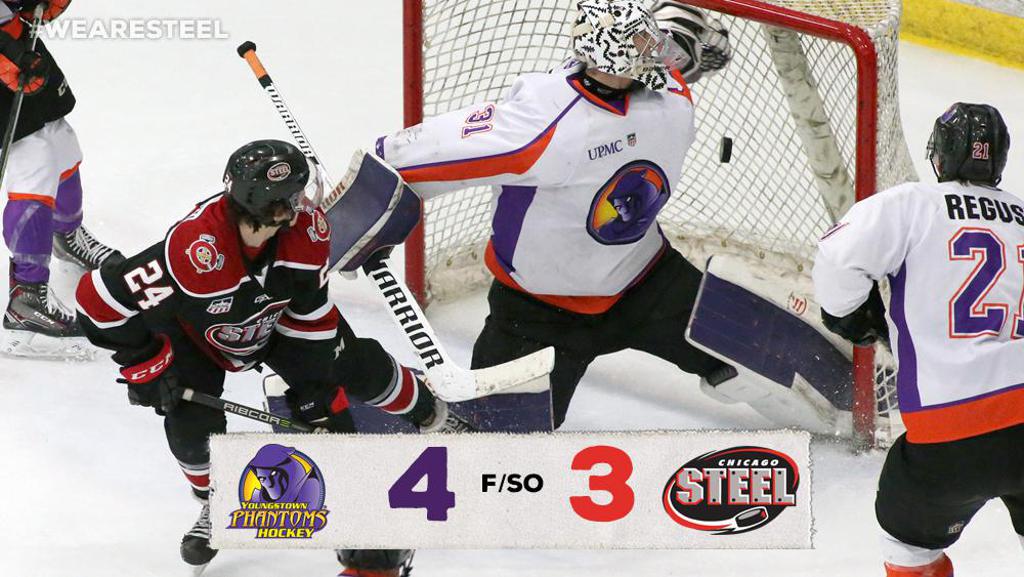 GENEVA, ILLINOIS — The Chicago Steel (18-14-1-3, 40 pts.) rallied from a 3-0 deficit with goals from Nick Abruzzese, Robert Mastrosimone and Aaro Vidgren to force overtime, but fell to the Youngstown Phantoms (18-14-4-1, 41 pts.) 4-3 via shootout Saturday at Fox Valley Ice Arena. Max Ellis and Mike Regush each recorded a regulation goal and a shootout goal for the Phantoms.

The Steel outshot Youngstown 42-24 in the game, including 19-3 in the third period, and 3-0 in overtime. Mastrosimone finished with a three-point night (1-2–3). Goaltender Justin Robbins made 21 saves for the Steel.

Phantoms left wing Chase Gresock opened the scoring, recording his team-leading 18th goal of the season on the game’s first shot, a power play one-timer 57 seconds into the first period.

Youngstown increased its lead with a goal on its first shot of the second period when Matt Barry connected a pass to Regush, sending him in on a breakaway. Regush fired a shot over the glove at 3:33. The Phantoms improved their lead to 3-0 at the 11:46 mark when Max Ellis went far side, picking the upper corner.

Abruzzese got the Steel on the board less than two minutes later, patiently skating down the left wing and firing a shot from the bottom of the faceoff circle over the blocker of Youngstown goaltender Ivan Prosvetov at 13:25.

The Steel rally continued in the third period. Abruzzese centered a pass to the top of the crease and Mastrosimone shoved a backhanded over Prosvetov’s left shoulder at 6:55. Then, during 4-on-4 action with 4:55 remaining in regulation, Mastrosimone dished a pass across the top of the goal mouth to an open Vidgren, who quickly fired a blocker-side shot home to tie the game, 3-3.

The two teams went to overtime for a second time in three meetings this season. Neither team found a goal during the five-minute, three-on-three bonus session, and the game went to a three-round shootout. Ellis scored for Youngstown in round one while Vidgren was denied. Both Barry and McLaughlin failed to score in the second round, giving Regush an opportunity to win the game in the first shot of round three. Regush fired a low shot, glove side, to clinch the game for the visitors.

Youngstown left the Fox Valley with four points on the weekend set, passing Chicago by one point in the Eastern Conference standings. Vidgren has scored four goals and three assists over Chicago’s last four games. Abruzzese has a four-game point streak (1-4–5). The Steel are winless in three shootout games this season. The Phantoms have won four games in a row.

The Steel return home Friday, Feb. 9 to take on their I-55 rival, the Central Illinois Flying Aces, at 7:05 p.m., featuring a 2019 Chicago Bears Super Bowl Celebration (we’re very optimistic). Chicago then closes the week Saturday night at the Green Bay Gamblers. For more information, or to purchase tickets, call 855-51-STEEL, stop by the Box Office at Fox Valley Ice Arena or visit ChicagoSteelHockeyTeam.com.