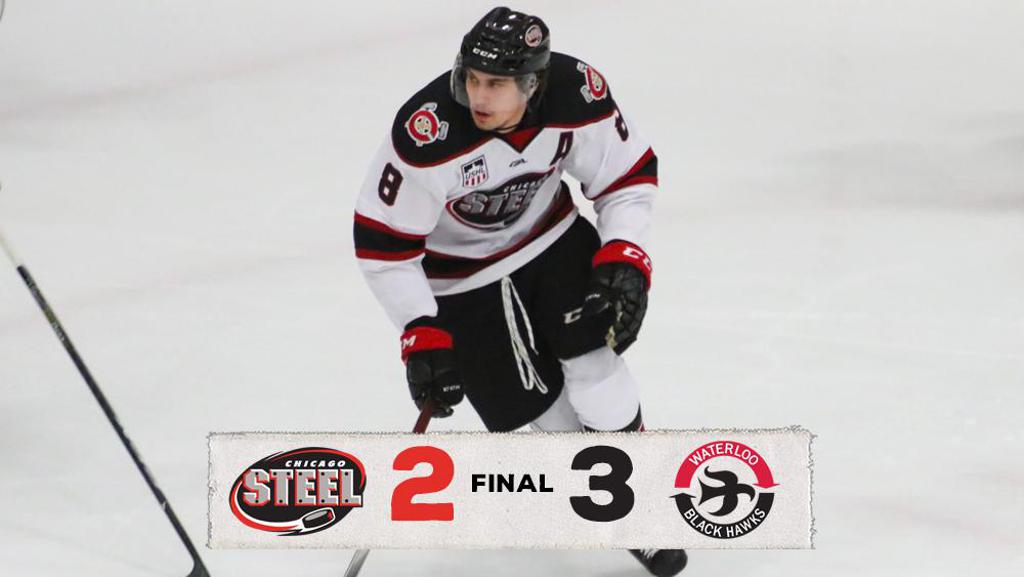 GENEVA, ILLINOIS — Jack Drury and Garrett Wait tallied goals in the final nine minutes as the Waterloo Black Hawks rallied for a 3-2 win over the Chicago Steel Tuesday at Young Arena.

Robert Mastrosimone and Samuel Bucek each scored their 11th goals of the season for the Steel. Chicago captain Derek Daschke recorded two assists.

Mastrosimone opened the scoring on the game’s first shot on goal, burying a backhand from the bottom of the right-wing circle at 1:01. The Steel were limited to just three additional shots in the first period, but led 1-0 at the intermission.

The Black Hawks tied the game early in the second period when Ben Copeland recorded a shorthanded goal at 3:33. Copeland created a turnover at the Waterloo blue line and raced down the ice on a breakaway, firing in a glove-side shot from the low slot.

Bucek regained the lead in the third period with a power-play goal at 3:33. The Steel winger fired a far-side shot through traffic to beat Waterloo netminder and Philadelphia Flyers prospect Matej Tomek on the blocker side.

With 8:51 remaining, Waterloo’s comeback began when Drury bounced a stick-side shot over the goal line to knot the game at two. Then, with just over a minute to play, Wait recorded the game-winning goal, tapping in a cross-ice, back-door pass from Jackson Cates.

Drury has now recorded at least one point in 20 consecutive games for Waterloo. Mastrosimone has registered 15 points for the Steel since the start of the calendar year. Chicago goaltender Oskar Autio finished with 30 saves. Each team went 1-for-4 on the power play.

The Steel then close the week Saturday night on the road against the Green Bay Gamblers. For more information, or to purchase tickets, call 855-51-STEEL, stop by the Box Office at Fox Valley Ice Arena or visit ChicagoSteelHockeyTeam.com.