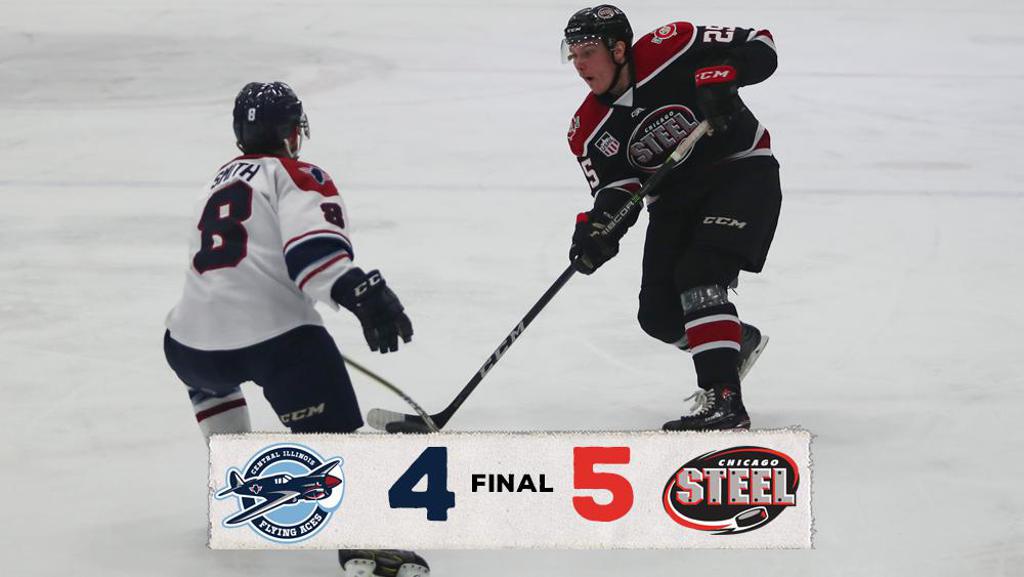 GENEVA, ILLINOIS — Aaro Vidgren extended his point streak to six games (5-4–9) by recording an unassisted goal with 45.4 seconds remaining to give the Chicago Steel a 5-4 victory Friday over the Central Illinois Flying Aces at Fox Valley Ice Arena.

Bucek lit the lamp on the game’s first power play, grabbing the puck after a Nick Abruzzese faceoff win, skating into the slot and firing a shot over Central Illinois goaltender Zach Stejskal’s blocker to extend his point streak to three games (3-1–4). The Steel brought the 1-0 lead into the first intermission while tripling the visitors in shots by a 15-5 margin.

The Flying Aces tied the game when Lucas Breault received a pass all alone in front and fired a high shot, blocker-side past Steel netminder Justin Robbins at 8:20 of the second period. Andreev then scored his first of the contest with a power-play goal at 15:55. Breault started the play with a shovel pass to defenseman Brady Smith who found Andreev with a pass at the top of the slot. Andeev’s shot through traffic gave the Flying Aces their first lead of the night.

Central Illinois forward Jeremy Davidson added to the Flying Aces’ lead with another power-play goal at 17:54, firing a slap shot one-timer from the right dot off a feed from former Steel defenseman Charlie Raith.

Less than a minute later, the Steel got back within one when Travis Treloar, making his first USHL appearance, scored his first career goal. Graham Lillibridge stripped the puck to hold the zone and dished a pass to Treloar. Treloar pushed the puck to his forehand and rifled a shot over Stejskal’s glove.

The Steel tied the game early in the third period. Blake McLaughlin wove his way from the defensive-zone circle through neutral ice and into the offensive zone before saucing a backhanded pass across the top of the goal mouth to Jordan Seyfert, who scored on a backhanded shot at 2:57.

Under three minutes later, Steel defenseman Derek Daschke sprung Bucek on a breakaway, and Bucek made no mistake, going forehand-to-backhand before beating a sprawling Stejskal and giving the Steel a 4-3 lead.

The seesaw game continued as Andreev added a shorthanded goal, following up on his rebound at the top of the crease to tie the game with 5:49 remaining.

The game appeared to be heading to overtime but Vidgren had other plans in the final minute. Off a faceoff in the right circle, the Flying Aces attempted to clear the zone, but the puck bounced off the back of Central Illinois center Cameron Burke, falling at Vidgren’s feet. Vidgren quickly chopped a shot, surprising Stejskal over the glove to tally the game winner.

Justin Robbins picked up his fourth victory of the season in net. The Steel went 1-for-6 on the power play and 1-for-3 on the penalty kill. Chicago outshot Central Illinois, 33-27.

The Steel are back in action Saturday at the Green Bay Gamblers. Puck drop at Resch Center is scheduled for 7:05 p.m. CT. Steel games are carried live on Mixlr (free audio) and HockeyTV (iPPV). For more information, visit ChicagoSteelHockeyTeam.com/broadcast.

Next week, Chicago begins a season-long, seven-game homestand. Friday, Feb. 16 is Olympic Night against the Des Moines Buccaneers, featuring an appearance by Chicago Blackhawks mascot Tommy Hawk. The following night, the Steel face the Madison Capitols, and will host the team’s first-ever Wiener Dog Races. Faceoff each night is set for 7:05 p.m. For more information, or to purchase tickets, call 855-51-STEEL, stop by the Box Office at Fox Valley Ice Arena or visit ChicagoSteelHockeyTeam.com.