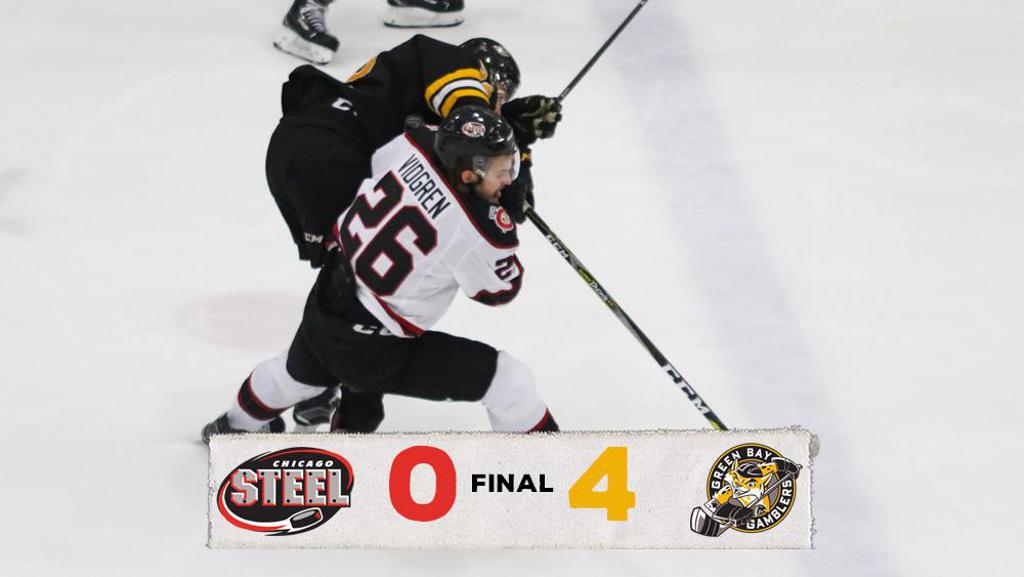 Rory Herrman, Lean Bergmann, Brock Caufield and Mac Welsher recorded goals for the Gamblers. The win marked the third shutout of the season for Zhukov, a Vegas Golden Knights prospect, and his second blanking of the Steel at Resch Center after a 4-0 triumph in the teams’ prior meeting at Resch Center on Nov. 25.

After a scoreless first period in which the Gamblers outshot the Steel, 18-8, Herrman opened the scoring for Green Bay just 2:10 into the second period when he redirected a point shot from Michael Underwood through Chicago netminder Oskar Autio’s five-hole.

Green Bay added to their lead with 3:43 to play in the second period when Bergmann stripped Blake McLaughlin of the puck, skated in on a breakaway and scored on the blocker side.

The Gamblers added a third goal with 8:55 to play in the game when Jesse Jacques found Caufield on a two-on-one, creating a simple tap-in past an outstretched Autio.

Welsher capped the scoring 3:52 later when he found a loose puck behind the net and sent a backhander over the goalie’s left shoulder.

Chicago was unable to capitalize on seven power play opportunities while Green Bay finished with no goals on two chances. Samuel Bucek and Baker Shore led the way for Chicago with four shots each.

Chicago begins a season-long, seven-game homestand Friday, Feb. 16 on Olympic Night against the Des Moines Buccaneers, featuring an appearance by Chicago Blackhawks mascot Tommy Hawk. The following night, the Steel face the Madison Capitols, and will host the team’s first-ever Wiener Dog Races. Faceoff each night is set for 7:05 p.m. For more information, or to purchase tickets, call 855-51-STEEL, stop by the Box Office at Fox Valley Ice Arena or visit ChicagoSteelHockeyTeam.com.