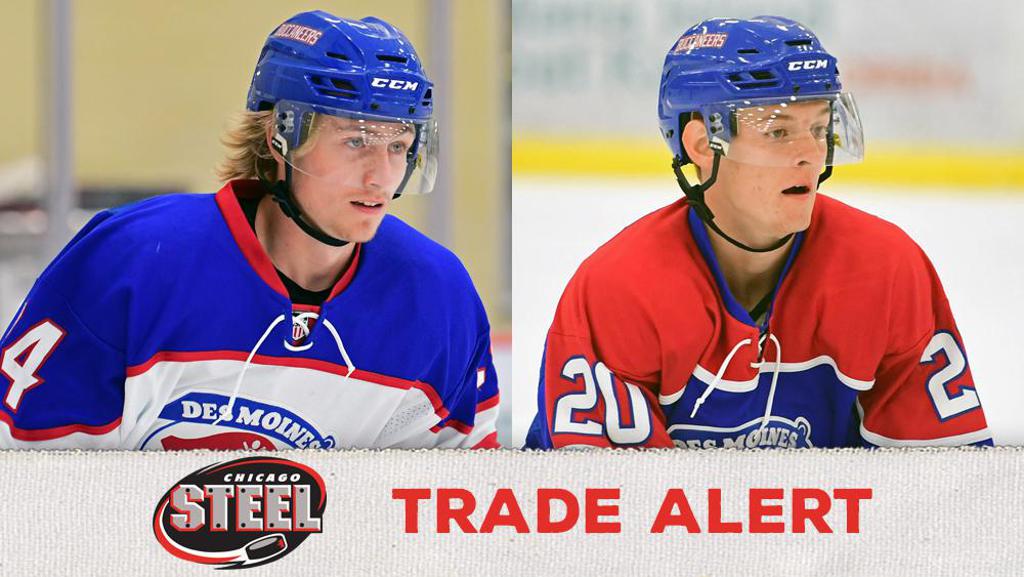 GENEVA, ILLINOIS — In a swap of forwards with the Des Moines Buccaneers on Tuesday, the Chicago Steel have acquired Buccaneers captain Eric Otto and first-year winger Erik Urbank in exchange for Sam Stevens and C.J. Walker.

Otto, 20, is a 6-foot-2, 179-pound center out of Burnsville, Minn., where he previously served as captain of the Burnsville Blaze (USHS). The veteran forward has recorded 21 points (10-11–21) in 75 career USHL games over the course of two seasons.

Urbank, 18, is in his first USHL season, and has recorded 19 points (10-9–19) through 33 games. The Buffalo, N.Y., native played last season in the OJHL for the Buffalo Jr. Sabres. He is committed to Dartmouth College (ECAC).

Stevens, 17, recorded two goals and one assist for the Steel in 26 games. He is committed to the University of Wisconsin (Big Ten). Walker, 18, appeared in 36 games with Chicago, notching seven points (3-4–7), and is committed to Minnesota State University (WCHA). Each player is in his first USHL season.

Otto and Urbank are expected to make their Steel debuts this Friday, Feb. 16 against their former team, the Des Moines Buccaneers, as Chicago begins a season-long, seven-game homestand at Fox Valley Ice Arena.

Friday’s 7:05 p.m. game is Olympic Night, featuring an appearance by Chicago Blackhawks mascot Tommy Hawk, and athletes from the Special Olympics will be honored at the game, along with various Olympic-themed activities for fans in attendance. The following night, the Steel face the Madison Capitols, and will host the team’s first-ever Wiener Dog Races. For more information, or to purchase tickets, call 855-51-STEEL, stop by the Box Office at Fox Valley Ice Arena or visit ChicagoSteelHockeyTeam.com.