Teams combine for five goals in the second period 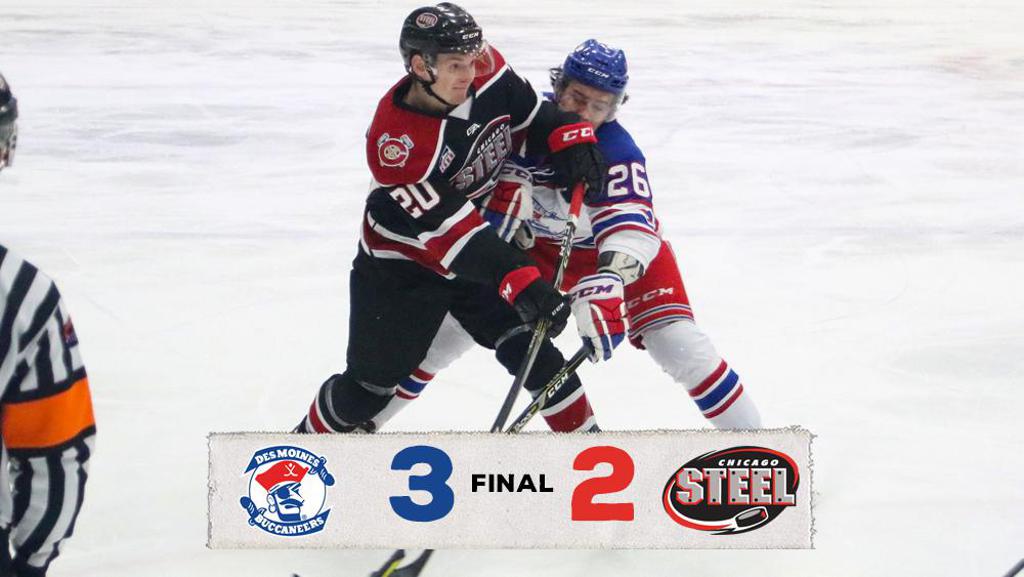 GENEVA, ILLINOIS — In a game that featured all five goals scored during a nine-minute stretch in the second period, the Des Moines Buccaneers defeated the Chicago Steel 3-2 Friday at Fox Valley Ice Arena.

Neither team found the net in a first period that saw Chicago outshoot Des Moines 12-3.

The high-scoring period started with a Vidgren wrist shot from the high slot that found room over Durny’s blocker. Vidgren was set up from an outlet pass from Graham Lillibridge before a give-and-go with Bucek sprung Vidgren into the offensive zone. With the secondary assist, Lillibridge moved into a tie for 10th all-time in Steel assists (54) with forward Mason Bergh (2013-15).

The lead lasted for just 2:39 before the Buccaneers got an equalizing goal from Napravnik. The German winger was set up by a pass from Werbik, who increased his team-leading point total to 30 (17-13–30).

Des Moines added to its lead 50 seconds later when Werbik received a pass from Halonen and fired a wrist shot over the glove of Chicago goaltender Justin Robbins and into the upper corner of the net.

Just 16 seconds later, Bucek connected on a Nick Abruzzese rebound and deposited the puck on the glove side past a sprawled-out netminder, tying the game 2-2.

Later in the period, Halonen broke the tie for Des Moines, jamming Werbik’s rebound through the five-hole at 10:44.

Neither team scored in the final frame despite a combined 30 shots. The Steel finished a perfect 6-for-6 on the penalty kill while converting once in four power-play chances.

The weekend closes Saturday night with a 7:05 p.m. home game against the Madison Capitols, and the Steel will host the team’s first annual Wiener Dog Races. 18 dachshunds are currently registered to go for gold in the event which has become a popular USHL tradition. The field will take part in a preliminary heat during the first intermission, and the top four racers will advance to the final during the second intermission. The dogs will race from the goal line to center ice prior to the Zamboni cut. Race proceeds will benefit Rescue Warriors Corp. and prizes have been provided by WoofBeach. For more information, or to purchase tickets, call 855-51-STEEL, stop by the Box Office at Fox Valley Ice Arena or visit ChicagoSteelHockeyTeam.com.