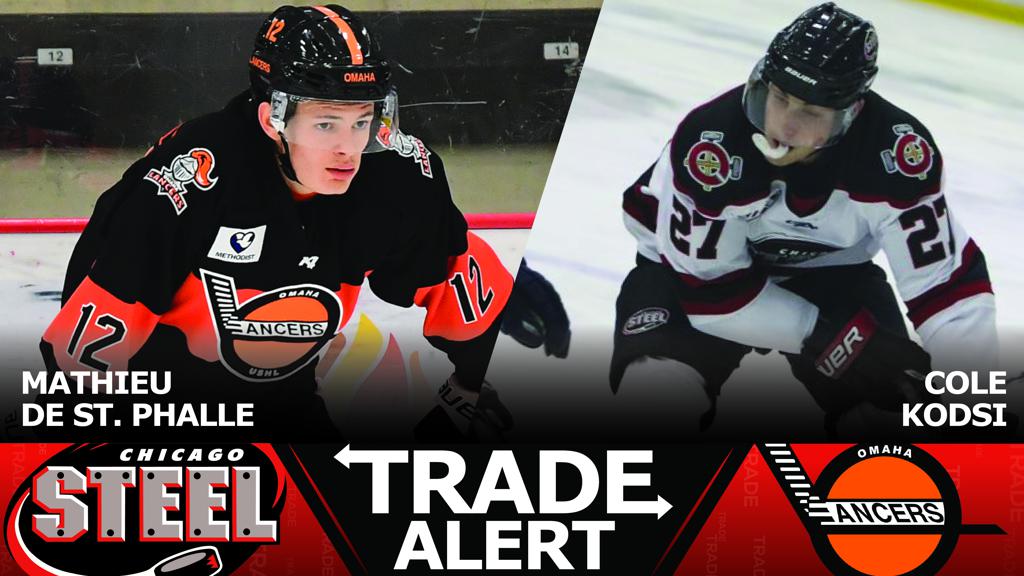 GENEVA, ILLINOIS – The Chicago Steel have acquired forward Mathieu De St. Phalle and a 2020 Phase II 7th Round Pick from the Omaha Lancers in a trade announced Thursday. In exchange, the Steel sent forward Cole Kodsi and a pair of draft picks to Omaha.

“The opportunity to add a player of De St. Phalle’s ilk just nine games into the season doesn’t happen often,” said Steel General Manager Ryan Hardy. “De St. Phalle is a smart, skilled, speedy playmaker whose style will mesh seamlessly with the pieces that we already have in place.”

De St. Phalle, 18, has four points (1-3-4) in nine games with the Lancers this season. He joined Omaha from Sioux City midway through the 2017-2018 season and scored a combined 27 points (6-21-27) in 55 games last season with the Lancers and Musketeers. De St. Phalle was traded to Omaha on December 23, 2017 in exchange for a player and two picks. The University of Wisconsin commit played in five games for the Musketeers in the 2016-2017 season and two games for the United States National Team Development Program.

“I’ve heard a lot about how Chicago plays and it’s a team I have a lot of respect for,” said De St. Phalle. “They play a fast, skilled, puck possession type game and that’s how I play. It will be a great opportunity for me.”

Although originally from Greenwich, Conn., De St. Phalle moved to Kildeer, Ill. and played two seasons in the Chicago Mission program from 2015-2017 and recorded 51 points (20-31-51) in 45 games. He was a member of the Honeybaked Bantam program for two seasons prior to the Mission. De St. Phalle plays primarily right wing but said he has had experience at center this season. The winger considers himself more of a playmaker and said he has a knack for creating scoring chances.

Kodsi, 18, appeared in seven games (1-0-1) this season for the Steel after recording one goal and assist in nine games with the team last season. He heads to Omaha with the 2019 Phase 1 first-round pick the Steel received from Omaha in a July trade that brought forwards Cole Quisenberry (4-4-8, 9 games) and Josh Groll (1-1-2, 8 games) as well as defenseman Jimmy Dowd (0-1-1, 6 games) to Chicago. The Lancers also received the Steel’s 2019 Phase II fifth-round pick.

“Kodsi is a first-class kid with a great work ethic who represented our organization with distinction,” said Hardy. “It is emotional to move a player who is held in such high esteem among his peers and our staff, but I felt this move was in the best interest of our hockey club at this time.”

De St. Phalle is expected to be in uniform this weekend at Fox Valley Ice Arena when the Steel play a pair of home games against Green Bay and Muskegon, including the first postgame Skate with the Steel following Saturday’s game.

Tickets for all Steel home games are on sale now starting at just $10 and stadium seating on the glass is available for $20. Parking is always free. The Steel offer discounted tickets for groups and season ticket plans start at just five games for $45.