STEEL SLIDE TO 7-2 WIN OVER PHANTOMS 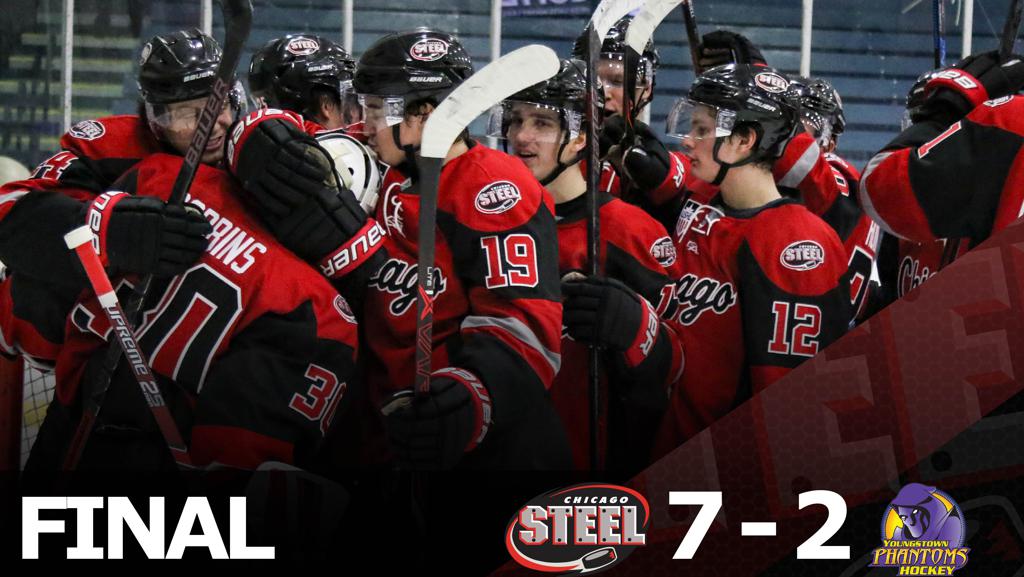 YOUNGSTOWN, OHIO — A night after a heartbreaking defeat, the Chicago Steel controlled the game, receiving goals from seven different scorers en route to a 7-2 win over the Youngstown Phantoms Saturday night at Covelli Centre. Goaltender Reilly Herbst picked up his fourth straight win as the Steel (14-9-1-0, 29 pts.) scored five unanswered goals to bury the Phantoms (10-10-0-3, 23 pts.) in the second matchup of a three-game weekend.

Youngstown started the scoring when forward Brett Murray picked up his third goal of the weekend, and sixth in a five-game point streak, 5:11 into the contest on the powerplay.

The next stretch of play was all Chicago as the Steel rattled off five-unanswered goals to take a commanding 5-1 lead. The scoring started when center Nick Abruzzese finished off a give-and-go passing play with right wing Neil Shea just 62 seconds after the Murray goal. Left wing Christian Sarlo started the play as he took a hit to make a play at center ice. The pass found Abruzzese’s stick for a blast home.

Chicago doubled down on its lead when left wing Gunnarwolfe Fontaine sent a wrist shot past the glove of Youngstown goaltender Jon Mor with 5:27 to play in the first. It was Fontaine’s fifth goal in his last five games.

The Steel opened the second period with a trio of goals in a span of 5:55. Left wing Josh Groll scored his third of the season 4:45 into the second. After center Cole Quisenberry won the faceoff back to defenseman Jimmy Dowd, Dowd’s point shot was blocked towards Groll who was perched in the faceoff circle for the tally.

Just 2:25 later, left wing Travis Treloar received a pass from Abruzzese and found room past the glove of Mor for a hard-earned goal as he was being dragged to the ice by a Phantoms skater. The Steel then made it 5-1 when center Adam Robbins struck on the powerplay at the 10:40 mark. During sustained pressure in the offensive zone, Treloar retrieved his own rebound off a point shot and found Robbins wide open in the near faceoff circle for the one-time slap shot past the blocker of Mor.

But the Steel disposed of any thought of a Youngstown comeback on this night with a pair of goals in the final six minutes of the second. Defenseman Owen Power finished off a perfect setup from Abruzzese to make it a 6-2 game with 5:17 to play in the second. Then, as the second period wound down, Shea got a goal of his own after Treloar sent a powerplay shot towards the net that bounced around before Shea spun and pounded the puck home from the doorstep.

The Steel outshot Youngstown 37-19 in one of the most complete team victories of the season.

Chicago closes the weekend series in Youngstown with a Sunday matinee scheduled for a 4:00 p.m. CT faceoff. The team is back in front of the home crowd on Saturday, December 29 when they take on Team USA U-17 in a 7:05 p.m. faceoff. The first 500 fans at the game will receive a Jurassic Rusty Bobblehead Doll and fans are encouraged to stick around after the game to Skate with the Steel.

Tickets for all Steel home games are on sale now starting at just $10 and stadium seating on the glass is available for just $20. Parking is always free. The Steel offer discounted tickets for groups and are offering a special Holiday Pack, which includes three games and four gifts for just $40.