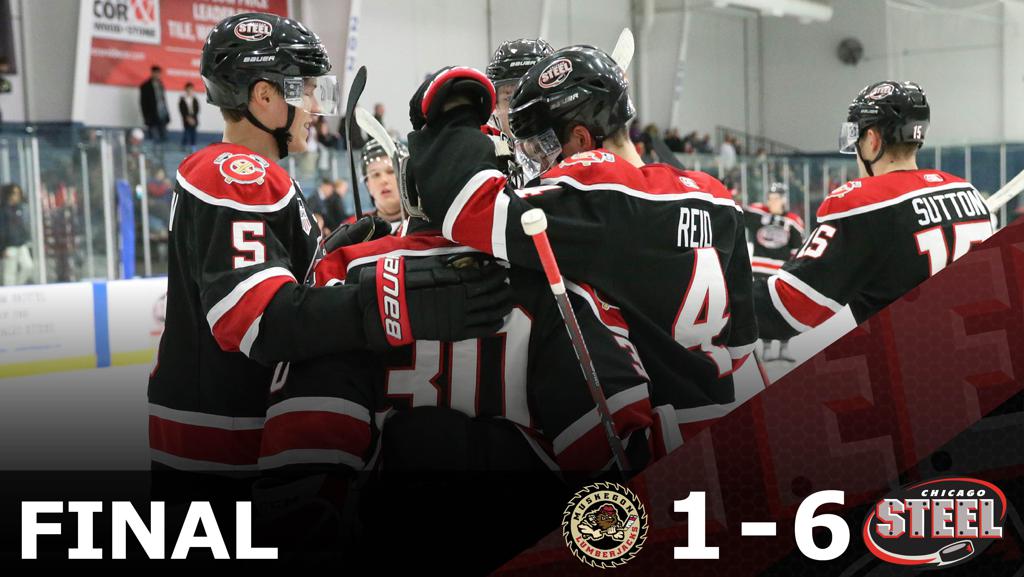 GENEVA, ILLINOIS — The Chicago Steel offense exploded for six goals, four from the special teams units, in a 6-1 win over the Eastern Conference-leading Muskegon Lumberjacks on Friday night at Fox Valley Ice Arena. Chicago (27-14-1-0, 55 pts.) scored first and ended the game with five unanswered goals against Muskegon (30-10-2-1, 63 pts.), picking up their first win of the season over their conference rivals. Steel center Nick Abruzzese led the team with a four-point night (1-3-4) while left wing Robert Mastrosimone scored twice (2-1-3) as goaltender Justin Robbins turned aside 22 of the 23 shots he faced. Defenseman Jimmy Dowd scored his first USHL goal in the victory.

After an emotional pre-game ceremony on Military Appreciation/Hometown Heroes Night that included a moment of silence for the victims of the shooting in Aurora, Ill. earlier in the day, the Steel put together one of their most complete performances of the season.

The Steel had a scoring chance on the first shift of the game as left wing Josiah Slavin collected a loose puck and found right wing Mathieu De St. Phalle with a setup pass that Lumberjacks goaltender Brandon Bussi snagged with his glove. Bussi shutout the Steel in the team’s previous meeting on New Year’s Eve in Muskegon.

There would be no shutout on this night as Abruzzese added to his league lead in points (58) with a powerplay goal to open the scoring. Defenseman Matteo Pietroniro sent the puck towards the net where Abruzzese was lurking to the right of the crease, pounding the puck home. Mastrosimone picked up his first point of the night to extend his point streak to nine games (7-7-14).

The Lumberjacks answered back with their only goal of the night 20 seconds later when forward Jagger Joshua finished off a flurry of Muskegon chances.

Mastrosimone’s first goal of the night came on the second powerplay chance of the game for the Steel. The Boston University commit received a puck from Abruzzese before circling to the top of the faceoff circle and sniping a shot top shelf over the glove of Bussi.

Just 30 seconds into the second period, the Steel made it three-for-three with the man-advantage as Mastrosimone picked up his second of the night. Mastrosimone’s team-leading 20th of the season came at the end of a tic-tac-toe passing play with Abruzzese and Pietroniro.

Steel center Cole Quisenberry extended his point streak to four-games (1-3-4) with a shorthanded tally less than three minutes later for his eighth goal of the season. The Brown University commit pickpocketed a Lumberjacks skater before streaking into the zone and firing a wrist shot over the blocker of Bussi, who was then pulled after allowing four goals on 11 shots.

Chicago closed the game with a pair of goals from blueliners Owen Power and Jimmy Dowd. Power’s seventh of the season came at the end of a broken play from Abruzzese as Power collected a loose puck in the slot and made a beautiful move to evade netminder Ryan McInchak and find the back of the net.

Dowd’s first career USHL goal came towards the end of the third period. The Penn State University commit skated through the zone, faked a slap shot to evade a skater and fired a wrist shot over the blocker to earn his eighth point of the season (1-7-8).

The Steel put their 14-game home winning streak on the line against Team USA U18 for a 7:05 p.m. faceoff Saturday at Fox Valley Ice Arena. The first 500 fans in attendance will receive a collectible Steel snow globe featuring Rusty playing hockey.

Tickets for all Steel home games are on sale now starting at just $10 and stadium seating on the glass is available for just $20. Parking is always free.